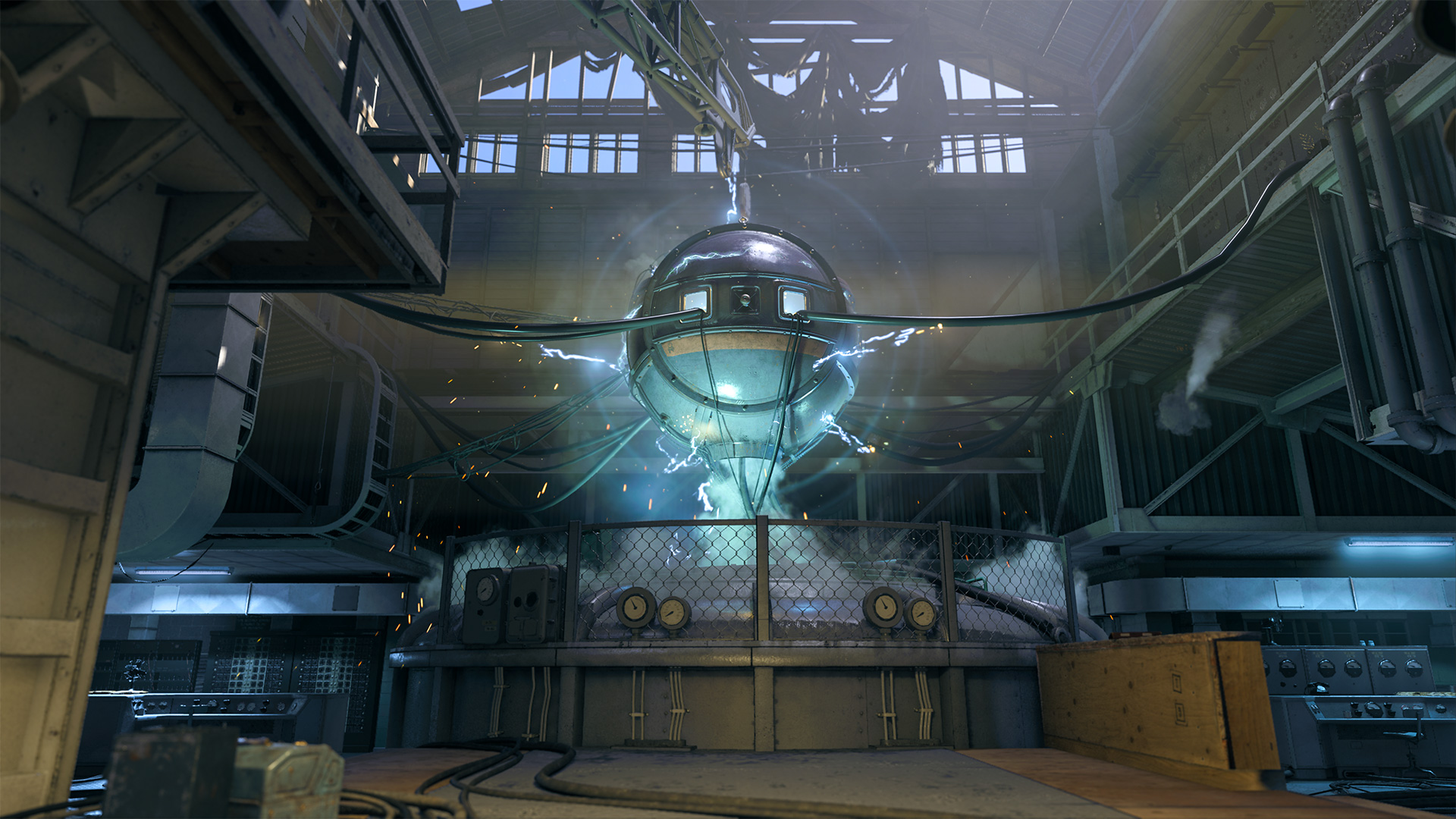 Below a seemingly innocuous mining facility lies an experimental test site seeking the upper hand in the growing conflict. Battle it out in the Lab and more in Sphere, now live alongside the launch of Classified Arms Reloaded. Read on for a map overview and tips for securing this valuable location.

Below a seemingly innocuous mining facility lies an experimental test site seeking the upper hand in the growing conflict. Battle it out in the Lab and more in Sphere, now live alongside the launch of Classified Arms Reloaded. Read on for a map overview and tips for securing this valuable location.

Deep underground lies an experimental test site where research and development is underway that could turn the tide of the war. Now’s the time to deploy and take it by force. 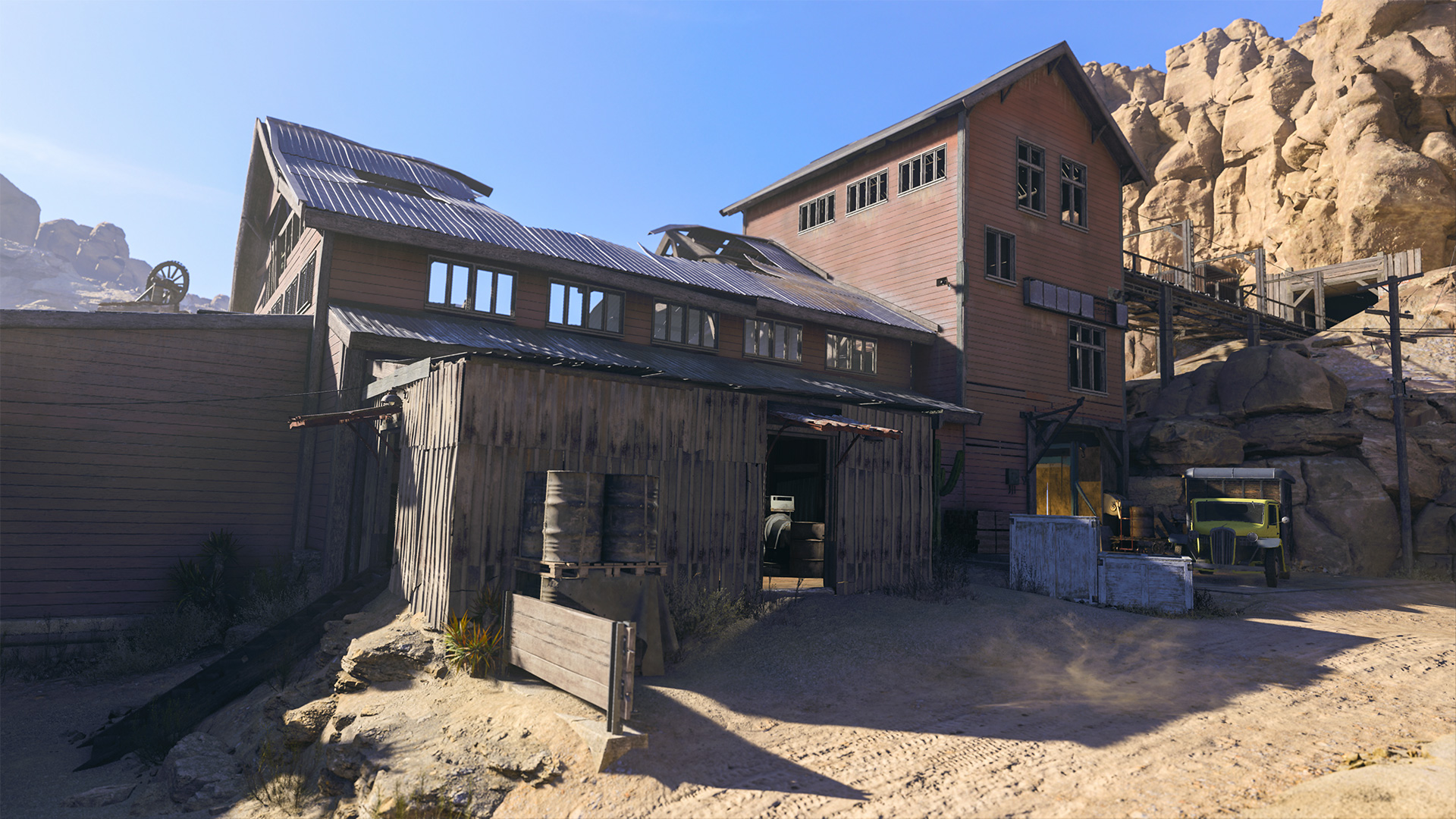 While seemingly a small-sized map, Sphere has dual layers that give Operators a greater space to move in than appears at first sight. The upper level is a vertically narrow space, with an open canyon to the north and south and a mock mining facility in between. Boulders and other obstacles here create lots of opportunities for flanking and outmaneuvering the enemy.

Though there are certainly long-range sightlines to be found on either end, it’s on the eastern path where you’re most likely to run into sniper battles. The Wooden Deck to the north is a perfect sniping vantage point, and from the south end you can determine just how much to make yourself visible before committing to the path. If you’re not afraid of some risk, take up position in the center Containers and eliminate enemy Operators on both ends.

It won’t take long to find the lower level, as there are multiple entry points throughout the map. Entrance C1 to the north and Entrance A1 to the south are the most direct, and the western path leads straight down into the Lab from either side. This is where things get scary. With entryways on all four sides and the eponymous sphere blocking a chunk of the middle, it’s difficult to track just where the next attack may come from.

Utilize the southern Mine and the northern Workshop to get a read on the middle before rushing straight in. When entering from the sides, you’ve got less leeway, but still some room to check the area. Don’t stick around too long, though, or you’re just as likely to get eliminated from behind. 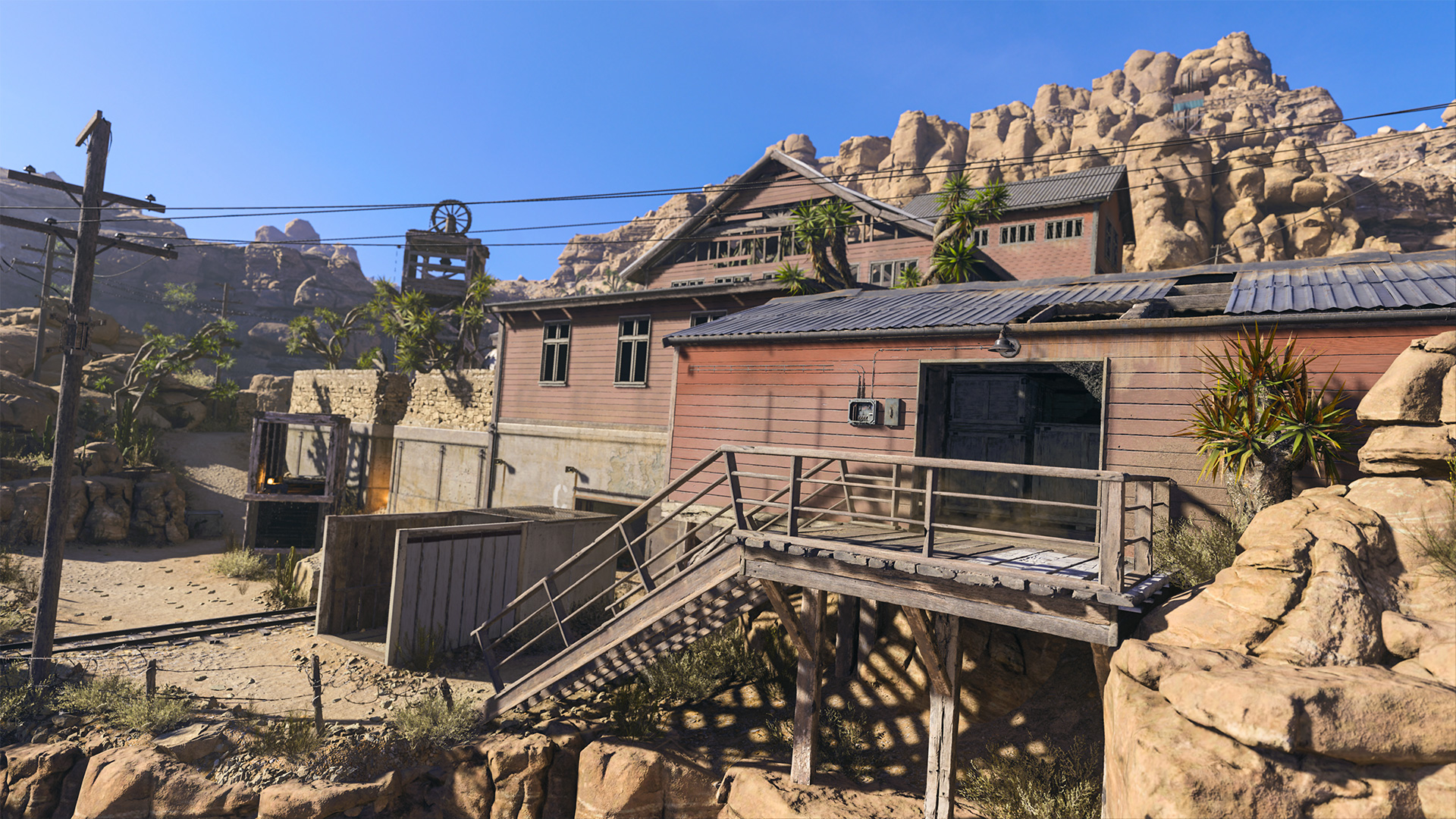 10. Side to Side. With the map’s narrow layout, players using long-range weapons can cover the sides to keep the heat off teammates underground. The eastern path will likely see the most sniper-to-sniper action, while on the western path you can often catch short-range players off guard as they attempt to duck into the Lab below. Check your minimap to help determine which side to cover in each moment.

9. A Tool for Every Skirmish. Consider using the Overkill Perk to equip a powerful mid- to long-range weapon and a punchy short-range blaster. What works best for you on the top layer with its myriad sightlines might not work so well below where space is more limited. With a weapon for each area, you’ll be prepared to fight no matter where the battle takes you.

8. Boom! With entry points on all sides, the Lab can be an overwhelming location to defend, but sometimes that’s just where you need to be. Take the Demolition Charge and plant it by an entrance close to your position. This works best in the narrow side entries, where enemies don’t have much room to escape the blast.

7. Squeeze on Through. The Vent and Dirt Tunnels connecting from the north and south, respectively, offer the sneaky player a valuable means of cutting down enemies unaware. Take along a Shotgun and blast enemy Operators trying to squeeze past. On the other end, toss in a grenade if you suspect someone’s lurking within.

6. Ladders, Ladders Everywhere. Sphere includes four separate ladders to facilitate movement between its various levels. Try and use all of the various access points when traversing the map to keep your enemies guessing where you’ll appear from next. The less predictable you are, the greater your advantage.

5. Engineers Welcome. The Engineer Perk can be especially useful here, allowing you to spot enemy equipment aboveground and belowground. With the newly released Trophy System being a good indicator that an Operator is nearby, you’ll have the upper hand when approaching their position. An especially useful tool in objective modes.

4. Care Package Incoming. With large obstacles offering cover around both the north and south spawn points up top, you’ve got a good chance of safely acquiring any Care Packages you call in. Wait for a lull in the battle, then go ahead and take your chance. Cross your fingers and hope for something strong.

3. Alert, Alert! We recommended Intuition in the suggested Loadout above, but High Alert is another great option for keeping tabs on enemies outside your view. When choosing between the two, keep in mind that High Alert has a much longer range than Intuition, though it won’t let you know if there’s any enemy just around the bend. When in doubt, try both in different Loadouts. The intel afforded by either is indispensable here.

2. Communicate! In the heat of battle, you may not notice right away whether those red dots on your minimap represent enemies aboveground or belowground. Make it easy for your team by calling out enemy Operators and specifying which layer of the map they’re positioned on. With some luck, they’ll do the same for you.

1. Loop-the-Loop. Feeling aggressive? Try looping through the center Lab and back around the western path using the C1 and A1 entrances. If you’re quick on your feet and quicker with your reflexes, you’ll remain a constant menace to the enemy team, always pushing back against their attempts to gain ground. 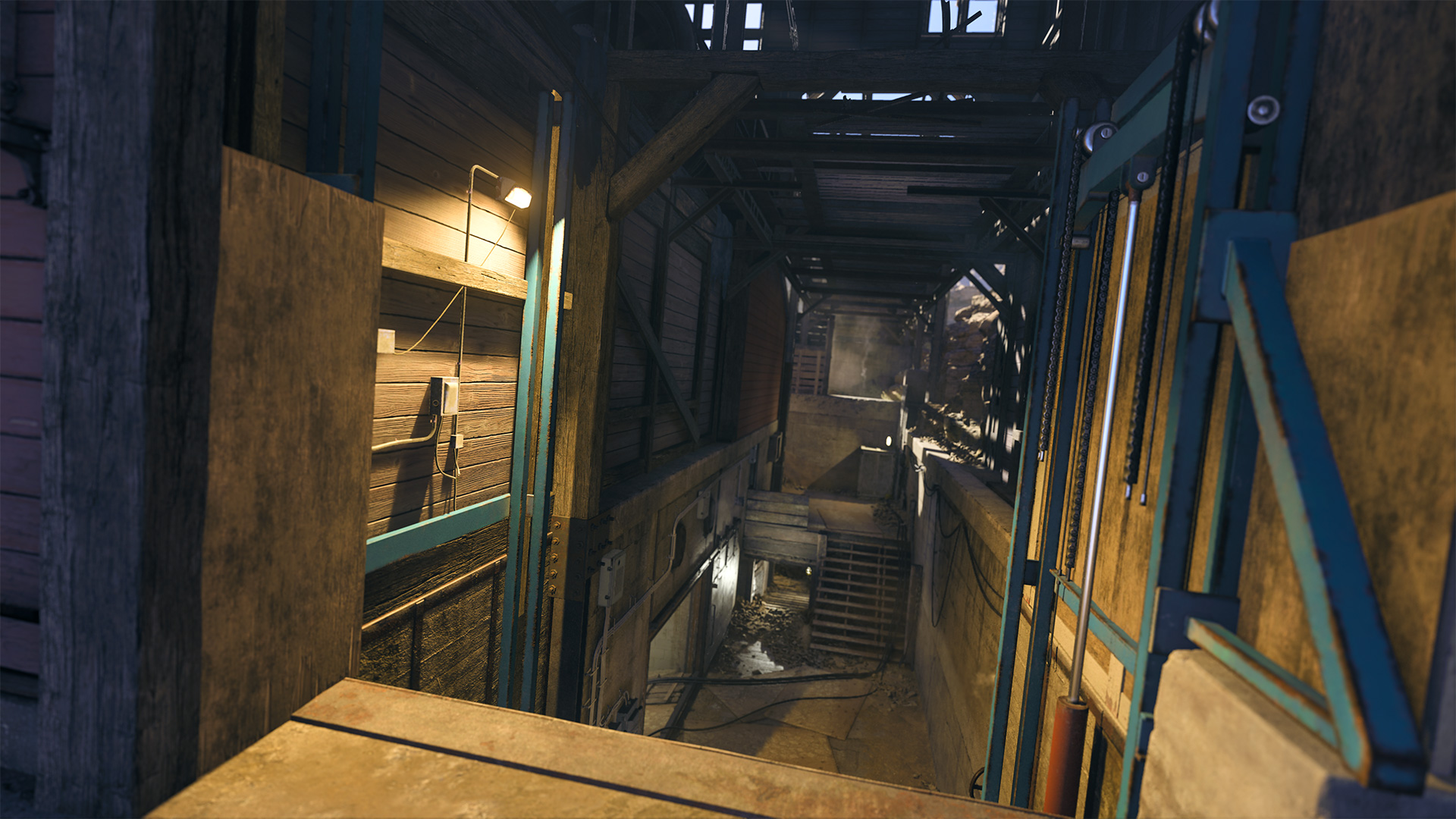 Along with Sphere, Classified Arms Reloaded brings a whole lot of new content to Vanguard and Call of Duty®: Warzone™.

In WarzoneTM, get around Caldera fast using the new Mine Cart Fast Travel System, fight for the best equipment in new High Value Loot Zones, and deploy to new limited-time modes across Caldera and Rebirth Island.

Call of Duty®: Modern Warfare® II Comms have officially activated: Stay tuned for more intel on the future of the Call of Duty franchise.

Run the first video game charity race during the Warzone Call of Duty Veteruns event. For every 10km run in-game, Activision will allocate $1 of a $1MM total donation towards the Call of Duty Endowment. Innovative partnership with Twitter lets fans tweet their progress through #CODVeteruns100K

Take center stage in this small-scale replica of a bustling metropolis. Mayhem joins the Multiplayer map rotation at the launch of Season Three beginning April 27. Read on for a map overview and tips for surviving the chaos.

Preparing for a New Era of Call of Duty®, Presented by Infinity Ward